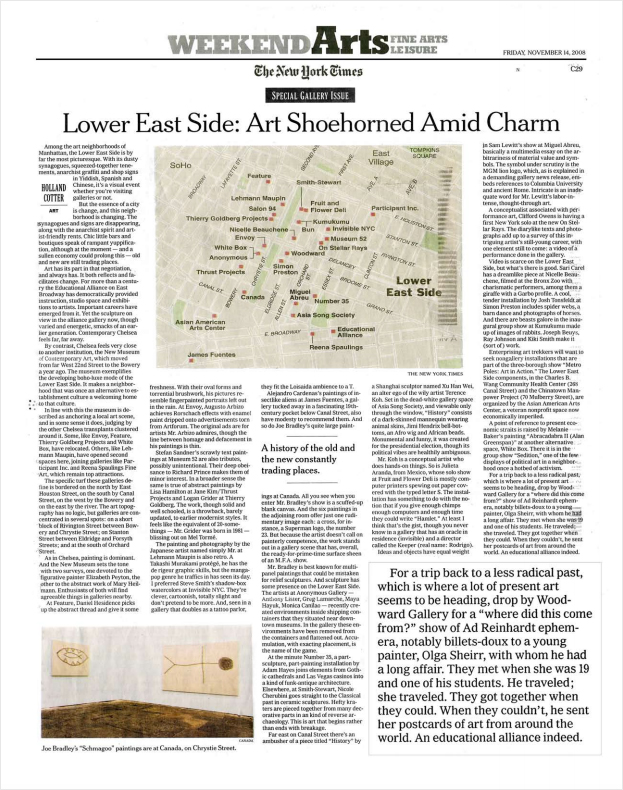 Scrutinizing Ad Reinhardt’s best-known works – the so-called black paintings – attentive viewers discover numinous voids and luminous crosses. Their subtleties demand that we fine-tune our vision, and their spirit invites us to envision one of the two preeminent themes in art and life: Thanatos, or death; not as an object of fear, but rather as a world of wonderment.
Woodward Gallery presents this never-before-seen exhibition to reveal a very different side of Reinhardt, and a corpus of work devoted to art’s other great subject: Eros, embodied here by 92 drawings, collages, cards, found objects and letters. Taken altogether, this ensemble reveals the artist’s love of wit and wordplay in general, and it encodes his two-decade-long love affair with Olga Sheirr in particular.

Some pieces are models of pith: a wee heart cut out of raw canvas commemorates one Valentine’s Day; and a vibrant silk-screen of Robert Indiana’s LOVE honors another. Reinhardt’s whimsical drawings take the form of a personal alphabet that hybridizes cartoons, glyphs, and enigmatic logos. Each of the love letters occupies a single sheet; all are carefully penned in cursive italics, and they’re so visually composed that they blur the border between pictures and words.

Intimate in size as well as character, these hybrids of image and text display Wit with a capital “W”: a concept that traces its lineage back to 17th century poets like John Donne and Andrew Marvell, whose hyperbolic language at once honors and amuses the object of the poet’s desire. Like Reinhardt’s signature paintings, every page demands contemplation, and rewards it. The individual bits are alternately sly, poignant, and seductive. The sum of the parts invites a rhetorical question: what could be warmer or more welcome than the laughter of one’s beloved?