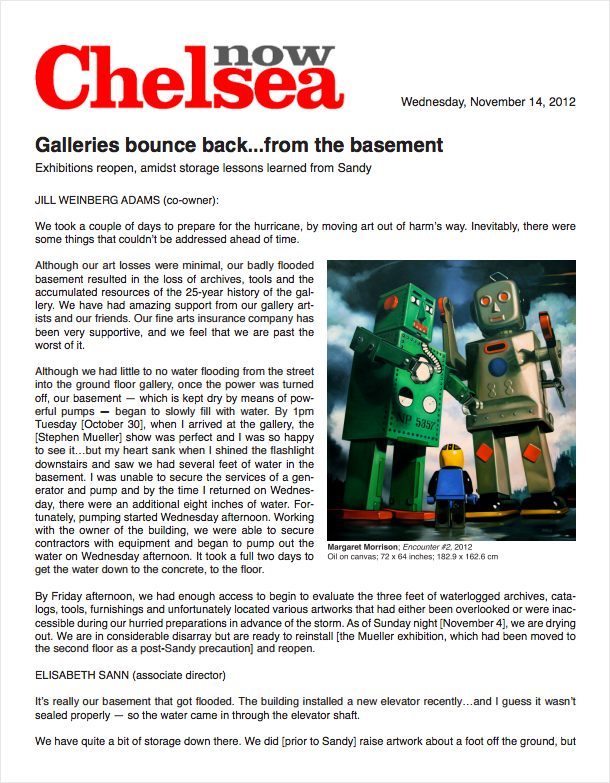 Artist Margaret Morrison loves considering life from a child’s point of view. Life becomes mysterious and magical all over again. In “Child’s Play,” Morrison relives her world of imagination with giant robots, enormous pull toys, life size dolls, and Fisher Price people. She observes from a naive perspective yet tantalizes the grown- ups with an undertone both scary and delightful at once.

Morrison’s witty new body of work is the second in her series of larger-than-life oil paintings. When we last experienced Morrison’s realistically haunting images, candy and confections exploded in enormous proportions with exquisite color like cadmium red. Her next investigation in the progression is based on toys. Bold color and drama fabulously intermingle with live action as Morrison’s Barbie dolls are caught in an intimate moment, Fisher Price wooden people ascend a ladder to a rolling Trojan Horse, or a rotary phone seemingly moves with menacing eyes.

Morrison’s current paintings emphasize the artist’s particular ability to evoke a story from a single still life. We are treated to familiar images we had enjoyed as children. Their presence is huge in perspective and provocative as they once dominated our imagination when we were small. Morrison’s characters now are set in their own play while we, as the eager participant, enter the game anew cast with adult experience. This not-to-be-missed exhibit has Margaret Morrison amusing our senses, emotions and memories. She provides the revitalizing spark our imagination needs today to dance and sing unabashedly once more.