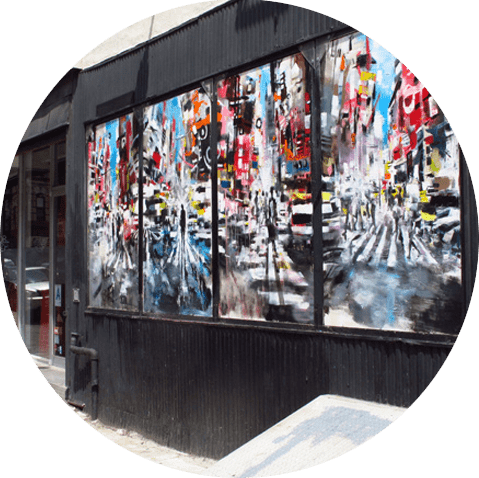 Woodward Gallery is proud to feature Australian Artist Brad Robson at the following locations this Summer Season:
The Pool Room Mezzanine of the historic Four Seasons Restaurant at 99 East 52nd Street with large scale urban-scene canvases; with a 15 foot new mural on the Woodward Gallery Project Space at 132A Eldridge Street; and with food paintings at Gourmet Garage, SoHo Windows 24/7 located at 489 Broome Street, NYC.

Brad Robson was born and currently lives and works in Sydney, Australia. Robson started on a graphic designer trek at the age of 19 years. He is a self taught fine artist who developed his technique as he completed studies in Graphic Design and Advertising. Robson became a teacher on Album Sleeve Designs for a college in Sydney while continuously pursing his painting career.

The city, as a representation of vitality and space, galvanized his inspiration to paint with colorful abstracted forms. In 2011, Robson completed a residency in Illustration and Visual Storytelling at the famed School of Visual Arts in NYC. In 2013, Robson had his premiere solo exhibition at the Berlin Collective in Manhattan. Since then, he caught the eye of Director John Woodward and is featured in three simultaneous New York City solo exhibitions.